Active Faults at Structure's Foundations: Definition and Its Infulence on Hazard Assessment 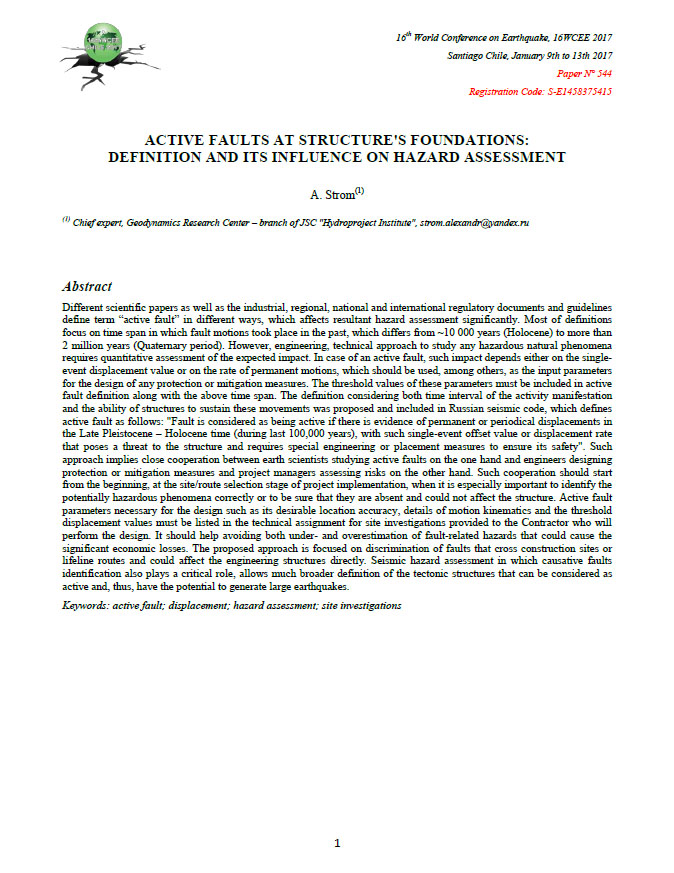 Different scientific papers as well as the industrial, regional, national and international regulatory documents and guidelines define term “active fault” in different ways, which affects resultant hazard assessment significantly. Most of definitions focus on time span in which fault motions took place in the past, which differs from ~10 000 years (Holocene) to more than 2 million years (Quaternary period). However, engineering, technical approach to study any hazardous natural phenomena requires quantitative assessment of the expected impact. In case of an active fault, such impact depends either on the single-event displacement value or on the rate of permanent motions, which should be used, among others, as the input parameters for the design of any protection or mitigation measures. The threshold values of these parameters must be included in active fault definition along with the above time span. The definition considering both time interval of the activity manifestation and the ability of structures to sustain these movements was proposed and included in Russian seismic code, which defines active fault as follows: "Fault is considered as being active if there is evidence of permanent or periodical displacements in the Late Pleistocene – Holocene time (during last 100,000 years), with such single-event offset value or displacement rate that poses a threat to the structure and requires special engineering or placement measures to ensure its safety". Such approach implies close cooperation between earth scientists studying active faults on the one hand and engineers designing protection or mitigation measures and project managers assessing risks on the other hand. Such cooperation should start from the beginning, at the site/route selection stage of project implementation, when it is especially important to identify the potentially hazardous phenomena correctly or to be sure that they are absent and could not affect the structure. Active fault parameters necessary for the design such as its desirable location accuracy, details of motion kinematics and the threshold displacement values must be listed in the technical assignment for site investigations provided to the Contractor who will perform the design. It should help avoiding both under- and overestimation of fault-related hazards that could cause the significant economic losses. The proposed approach is focused on discrimination of faults that cross construction sites or lifeline routes and could affect the engineering structures directly. Seismic hazard assessment in which causative faults identification also plays a critical role, allows much broader definition of the tectonic structures that can be considered as active and, thus, have the potential to generate large earthquakes.